A.D.: New Orleans After the Flood

Overview: In his web comic turned graphic novel, A.D.: New Orleans After the Flood, Josh Neufeld follows the stories of five real-life Katrina survivors along with their friends and family, chronicling the experiences of these disaster-braving people before, during, and after the hurricane and subsequent flood.  Writing in a style that has been deemed “comics reportage,” Neufeld poignantly utilizes the graphic novel as 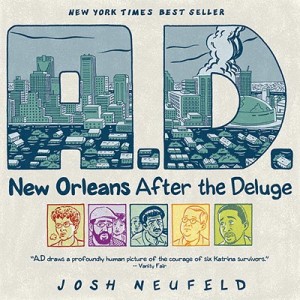 his form to bring to his readers jarring images of the 2005 disaster along with the idiosyncratic voices and episodes from a diverse array of New Orleans dwellers, who for a number of different reasons, decided not to evacuate the city upon the mayor’s recommendation and with the impending doom of the oncoming hurricane.  Moving beyond the generic and often distorted lens of the media, Neufeld, who volunteered in New Orleans for three weeks after “the deluge,” pieces together the events of Katrina and its aftermath as experienced and understood by ordinary people caught in the midst of it.  An alternative method for researching and discussing current affairs, this book could be used in the classroom in lieu of news articles, or as an opportunity to talk about digitized technology and self-publishing as an alternative platform for expression: Neufeld was discovered by an executive at SMITH Magazine because of a zine he issued about his experiences volunteering after Katrina, and was asked to create an online graphic novel depicting the voices of several unique survivors, bound together by their shared experience in New Orleans.

Character: The voices of the characters in this story are literally brought to life through the distinctive dialects of everyone involved, whether it be Denise’s profanity-infused Black English Vernacular, the medical doctor’s decidedly Yat infused speech (for all y’all regulah podnas who never been down da road to New Orleans, dat’s da way dey talk down der, named for da common expression, “where y’at?”), or Abbas’ Iranian meets New Orleans accent. The visual nature of this novel lends to the reader the ability to interpret the emotions of the characters in a manner that moves beyond narrative description and dialogue: through the expressions represented on their faces. Denise’s infuriated impatience with the way the disaster was handled by various bureaucracies becomes clear from her seemingly permanent scowl, lifted only when she witnesses something that sends her eyebrows shooting straight upwards and mouth gaping open, in utter shock by how “this whole situation is fucked up” (Neufeld 111). Abbas’ ostensible nonchalance and desire to not “wussy out” is made more complex when the reader knowingly witnesses the deep concern in his frowning face as his convenience shop is gradually destroyed before his eyes during the course of the storm and flood (Nefeld 159). These well-defined aspects of the characters allow Neufeld to seamlessly slip in and out of the various situations without even an ounce of momentary confusion on behalf of the audience.

Plot: Though the format of this book is non-traditional, the plot itself follows closely a fairly traditional narrative arch.  The book is divided into several sections, each indicative of an element of Freytag’s structure and other recognizable components of a story.  The action in  A.D. is presented as follows: “The Storm” (exposition, setting); “The City” (rising action, character introduction, development, and motivation); “The Flood” (climax, conflict); “The Diaspora” (falling action, continued character motivation); and finally, “The Return” (denouement/resolution).  Though as aforementioned, the characters portrayed represent a breadth of social and economic backgrounds – anyone from a high school senior who is son of a minister, to a stubborn doctor who eats daily at the legendary restaurant, Galatoire’s – the people in this graphic novel are united through plot: through their endurance of the same situation in the same city, even if each of them has a different experience of the hurricane.

Setting: The setting is elucidated not only more indirectly through the region-specific dialects voiced, but also through the panels that allow the reader to travel through the disaster-ridden city, seeing the water accumulating above cars, trees performing back-bending stretches to the ground, storefront signs dangling by a thread, and motorboats traveling along former streets, searching for bodies and attempting to offer help and in some cases, hope.  The story also moves from the exterior landscape of the city itself to the highly personal, interior houses of the characters, as the spectator watches comic book collections dissolving, pets getting pinned under rubble, foundations and walls crumbling upon the bed where a character slept only a few hours prior, and so on.  The panels, prevalent in any graphic novel, allow Neufeld to sometimes simultaneously show on a page the action taking place both inside and outside, expanding upon the way we normally ingest a novel’s setting in a more traditional story format.

Style: Exploring the possibilities that the graphic novel as a genre has to offer the creator, Neufeld varies the size and number of panels on a page in order to best capture the aspect of the images he wishes to convey in each delineated space: a close-up expression of a character’s face or a particular part of an object, a bird’s eye view of the flooded city, or a two-page spread that forces the eye to linger on the vast destruction of

Bird's eye view of the destruction

the environment or distress of the character.  Interesting to note as well is Neufeld’s monochromatic color scheme: he utilizes only one hue at a time in his panels, although the colors themselves vary from green to blue to purple to orange – perhaps to suggest the numbing sameness of the literal and figurative drowning at hand.  It is only in the last two sections of the novel, as the character’s lives come back together and some form of sanity or routine begins to be returned to them, that colors start to interact with one another, though only two at a time – purple and orange, green and blue – to indicate the still very gradual nature of the process of rebuilding lives and homes.

Theme: The themes in A.D. are subtly depicted, so much so that it might seem overly moralizing, simplistic, and reductive – three things that this novel is definitively not – if I try to state them here.  That being said, there is certainly an emphasis on the individual, particularly his triumph – or at the very least his survival and certainly his evolution – over and through a difficult situation.  Neufeld’s story can, in my opinion, hold a variety of purposes for its readers, whether it be helping our often desensitized youth to remember what it is to have empathy, or showing to all audience members that the media presents situations with a very specific agenda in mind, or simply just informing the uninformed about the gravity of our current events, and ideally inspiring some sort of desire to become involved in the world at large.

Viewpoint: The first three sections of A.D. are relayed by an omniscient narrator who illustrates the story playing out in present tense.  In an experimental shift perhaps only

The Doctor explaining the aftermath to Neufeld

possible in a format like the graphic novel, the last two sections interject this narration, placing Neufeld himself in the story as he talks to the characters over the phone, answering his questions about what happened after everything the reader just saw, and where they are now.  Using himself as a tool, Neufeld effectively moves the story towards its finish, all the while reminding his audience that the characters were in a sense not characters at all, but real people living under real circumstances.

Concluding remarks:  My recommendation?  Experience the detailed events of the hurricane yourself and go read Neufeld’s novel. I’m not the only one who appreciates his take on the events surrounding Katrina, either: “MTV,” Vanity Fair, The Daily Beast, Salon, and The San Francisco Chronicle have all included A.D. in their “best of” lists or awarded it recognition in some fashion.  While I would encourage offering financial support to the artist, if you simply cannot wait to get your hands on this one, you can read the original version of the piece here, at SMITH Magazine, as well as hear updates from Neufeld on his blog, watch and listen to interviews with the real characters, and learn more about the project!  And just in case you had any doubt about the nuances and literary merit of not only this graphic novel but the genre as a whole, listen to what Neufeld himself writes in the afterword to the print version of A.D.:

…I always planned for “A.D.” to be a book.  When comics are presented on the web –often one panel at a time–something of the gestalt of the comic book is lost: the interplay of the tiers of images on a page, the way a two-page spread can work to frame the argument and the drama, and aspects of timing, meter, and rhythm (Neufeld 193).

To use a reoccurring, ever-preferred word of us graphic novel hovel writers: sounds poetic.

This entry was posted in Book Reviews and tagged A.D. New Orleans After the Deluge, Hurricane Katrina, New Orleans. Bookmark the permalink.

2 Responses to A.D.: New Orleans After the Flood